How Communications will transform in a post-lockdown world

Activism in the digital age Greenpeace

Really looking forward to hosting this timely conversation about the communications’ new paradigm: join me for what… https://t.co/kdcAfzXqiD
@sashanaod 23 / 12 / 2021

Activism in the digital age Greenpeace

When Greenpeace Executive Director Kumi Naidoo wanted to leverage his profile as organisational leader and activist-at-heart, I developed a communications and executive profiling strategy to put him on top of the news cycle and help the organisation win.

How does Greenpeace best utilise social media to leverage the profile and personality of its International Executive Director, Kumi Naidoo – without developing a ‘cult of personality’ overshadowing its campaigns and broader mission?

After consultation throughout the organisation, my strategy articulated Kumi’s personality and role in a way that allowed for its more structured and consistent expression through a number of online, internal and external channels.

We took this approach to social media, where it had a direct impact on from the usual suspects like Twitter and Facebook, but also on Greenpeace-owned and external blogs, and critically, public speaking engagement and in executive profiling work to media.

An editorial direction for communications was also established to allow for the ongoing maintenance of social channels, and finally, a series of web shorts was commissioned and produced to further enhance Kumi’s profile. Called Living for a cause, the series addressed the Greenpeace organisation of today and positioned Kumi as a thought leading environmentalist.

Finally I called on the talents of photographer Tom van Heel to produce a series of iconic lifestyle portraits which could be used in media outreach and online. 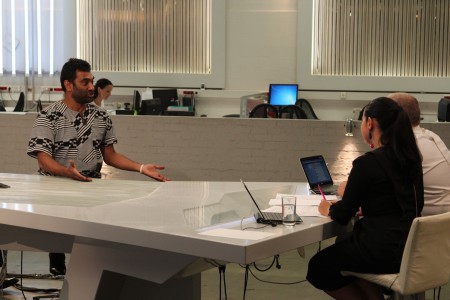 When change is a constant Philips

Like to know more about what I do and how I could help you? I’d love to hear from you!